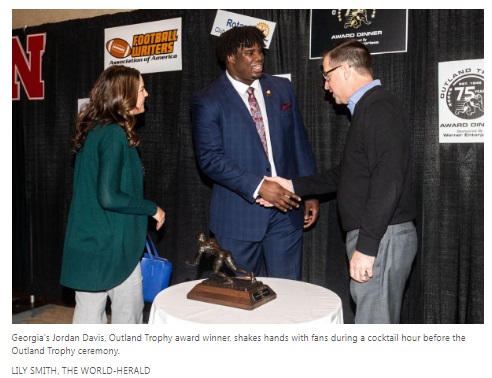 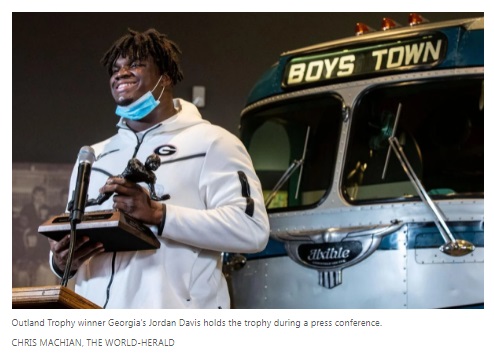 'It seems like a dream': Outland Trophy winner Jordan Davis has plenty to celebrate 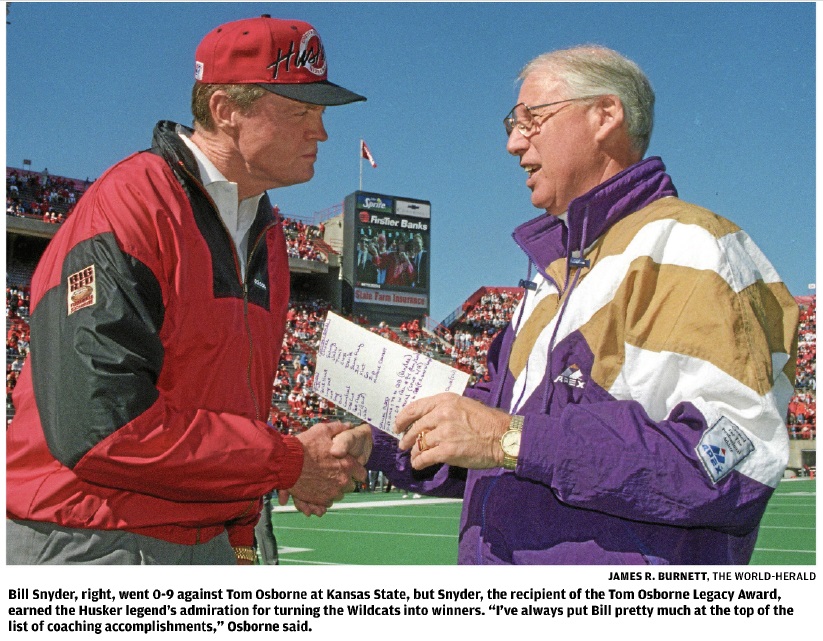 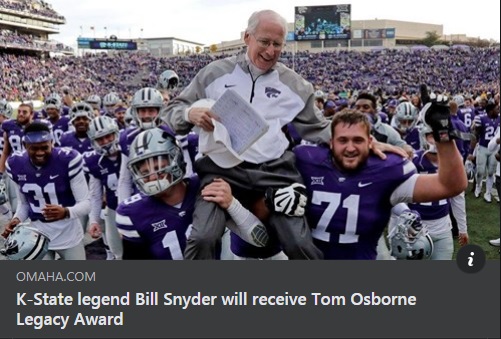 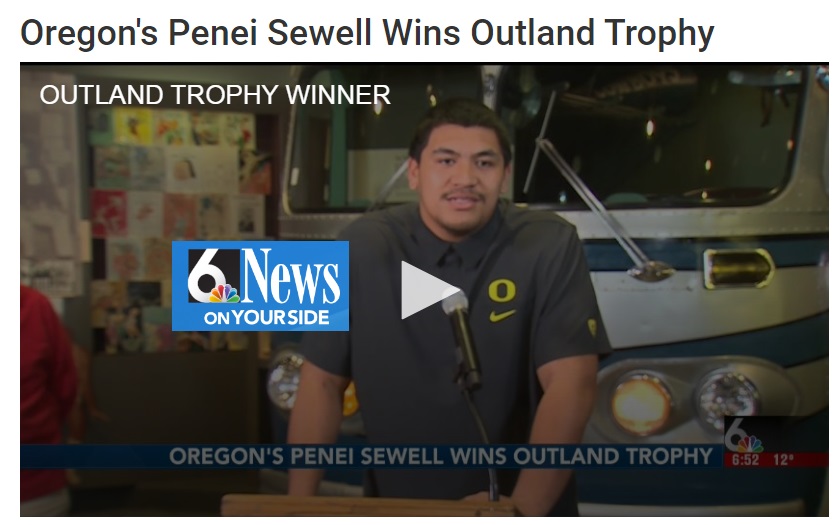 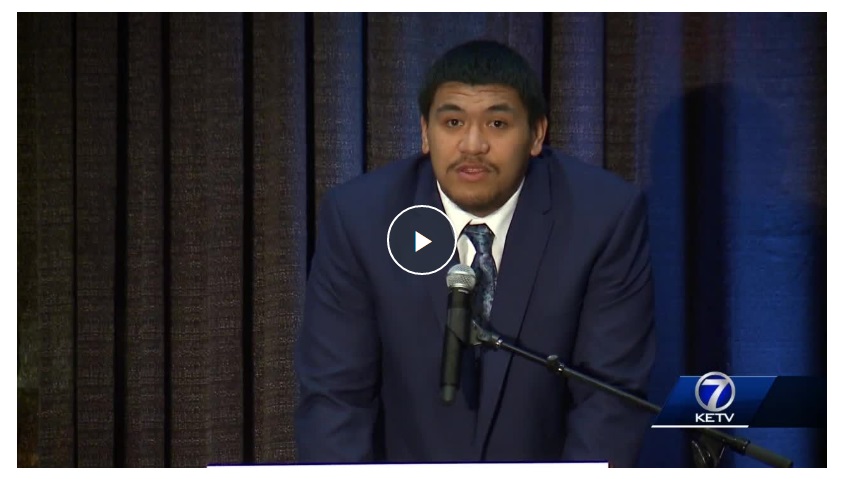 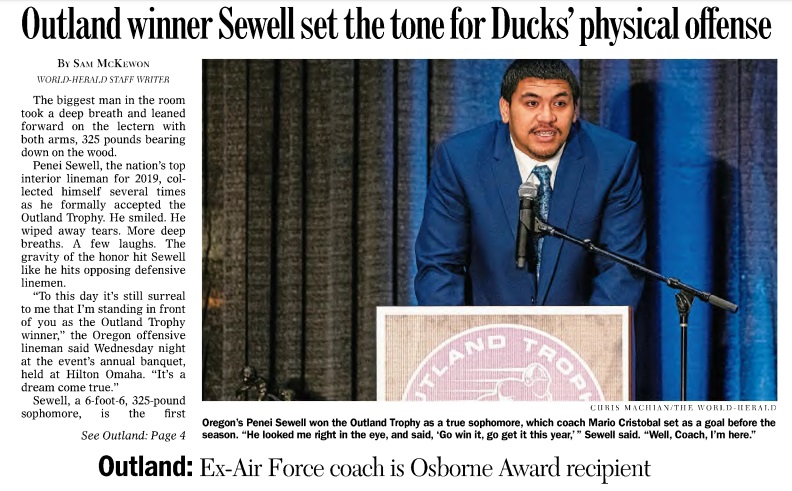 Link to Outland on Morning Blend –

Link to Outland on Morning Blend –

Jack Gangwish finished Nebraska’s first game this season with a dislocated elbow and the last with a broken hand. The left hand of the former defensive end was in a cast Thursday night at the Outland Trophy banquet. Gangwish said the injury happened in the first quarter of the Foster Farms Bowl, but he played on as Nebraska rallied to beat UCLA 37-29 in Santa Clara, California

•Before delivering lumps, Iowa’s Brandon Scherff had to take them

Brandon Scherff never felt like a future Outland Trophy candidate when he started his career at Iowa, thanks to the veterans on the Hawkeyes’ defensive line across from him in 2010. Scherff had the starter kit coming out of Denison, Iowa, but not much else.

Jake Cotton needs no history lesson before receiving the Cletus Fischer Native Son Award at the Outland Trophy banquet on Thursday night. Not only does Cotton know the story of Fischer, a Nebraska football assistant coach from 1960 to ’85, his father, Barney, played for Fischer in the 1970s.

From Denison QB to Outland winner? It’s possible for Scherff

The national college football award that is presented annu­ally in Omaha could end up this season as a local story.

Iowa offensive tackle Bran­don Scherff — whose hometown of Denison, Iowa, is 70 miles from where the Outland Trophy will be handed out — should be on everyone’s preseason short list of candidates as the coun­try’s top interior lineman.

The 6-foot-5, 320-pounder turned down a potential first­round slot in this NFL draft to return for his senior year, caus­ing Hawkeye head coach Kirk Ferentz to gush with praise.

That’s news in itself because “Ferentz” and “gush” rarely appear in the same sentence.

Barfknecht: Scherff a key cog in the Hawkeyes’ drive for West Division crown

“Him choosing to stay is really powerful for the whole football team,” Ferentz said. “When a guy chooses to come back, it’s because he really likes the college experience and is here for the right reasons.

“So the energy and positive vibes that a good established player shares with his team is just invaluable.”

Scherff’s position coach is Brian Ferentz, son of the head coach z, and a fellow non-gusher who proceeded to gush as much this spring as his dad about Scherff.

“If this guy doesn’t get recognized for what he is, moving forward, I think it would be a real travesty,” Brian Ferentz said. “There’s not a better offensive lineman in college football. … And you guys know me, I don’t say things like that lightly.”

The glow-speak has even trickled down to Scherff himself. Well, kind of. He has embraced it in the way a humble, hard-working, western Iowa guy would — because his boss said so.

“My goal is to be the best offensive lineman in the country,” Scherff said. “Coach Brian told me that should be my goal.

“It’s in the back of my head, but you can’t let that get to you. You have to focus on doing your job and everything will take care of itself.”

So what in the name of Hayden Fry is going on here?

Touting a returning All-Big Ten lineman for national honors hardly qualifies as smack-talk. Scherff is worth all that praise, and more. But for the button-downed Hawkeyes, it’s a welcome public show of confidence.

It’s also a good time for Iowa and Ferentz, in his 16th season, to show a little swagger because the Big Ten’s new West Division is wide open. And the Hawkeyes appear to have positioned themselves to try to take advantage.

In the past few years, Ferentz has refreshed his program.

Only three of his nine full-time as­sistants this fall will have more than three years on the staff. The offense and defense, while hardly revamped, employ some noticeable new wrin­kles, and better athleticism through sharper recruiting also shows.

Iowa has the second-easiest conference schedule — the Big Ten foes it will face were 23-41 (.359) last season. Only fellow West Division member Wisconsin’s slate is softer (22-42, .344). The biggest nonconfer­ence challenges are Iowa State and Pittsburgh.

So don’t rub your eyes after reading the following: The Hawkeyes could be 10-0 entering home games Nov. 22 against Wisconsin and Nov. 28 against Nebraska.

This is where guys like Scherff enter the picture.

When players this good stick around to help others figure things out, breakout seasons become possible. You counter by saying an offensive tackle can’t have an impact like that. Well, note that Scherff’s teammates voted him the offense’s most valuable player last season.

Now, Iowa instead of the NFL will benefit from this former high school quarterback’s body of work.

“The reason I came back,” Scherff said, “was to improve myself in all aspects of football — playing faster and smarter, and hopefully becoming a better leader.

“We’re trying to be the best offensive line in the Big Ten. So I’ve got to keep working my butt off, and pulling people along with me.”

With his skills and that attitude, Scherff might pull a whole bunch of folks to downtown Omaha in early January to see him pick up Iowa’s fourth Outland Trophy. And, just maybe, he’ll be wearing a Big Ten championship ring while doing it.

The Greater Omaha Sports Committee, a Non-Profit 501(c)3 organization founded in 1977.  The Committee consists of more than 1300 men and women. The membership includes key executives in all areas that involve Sports