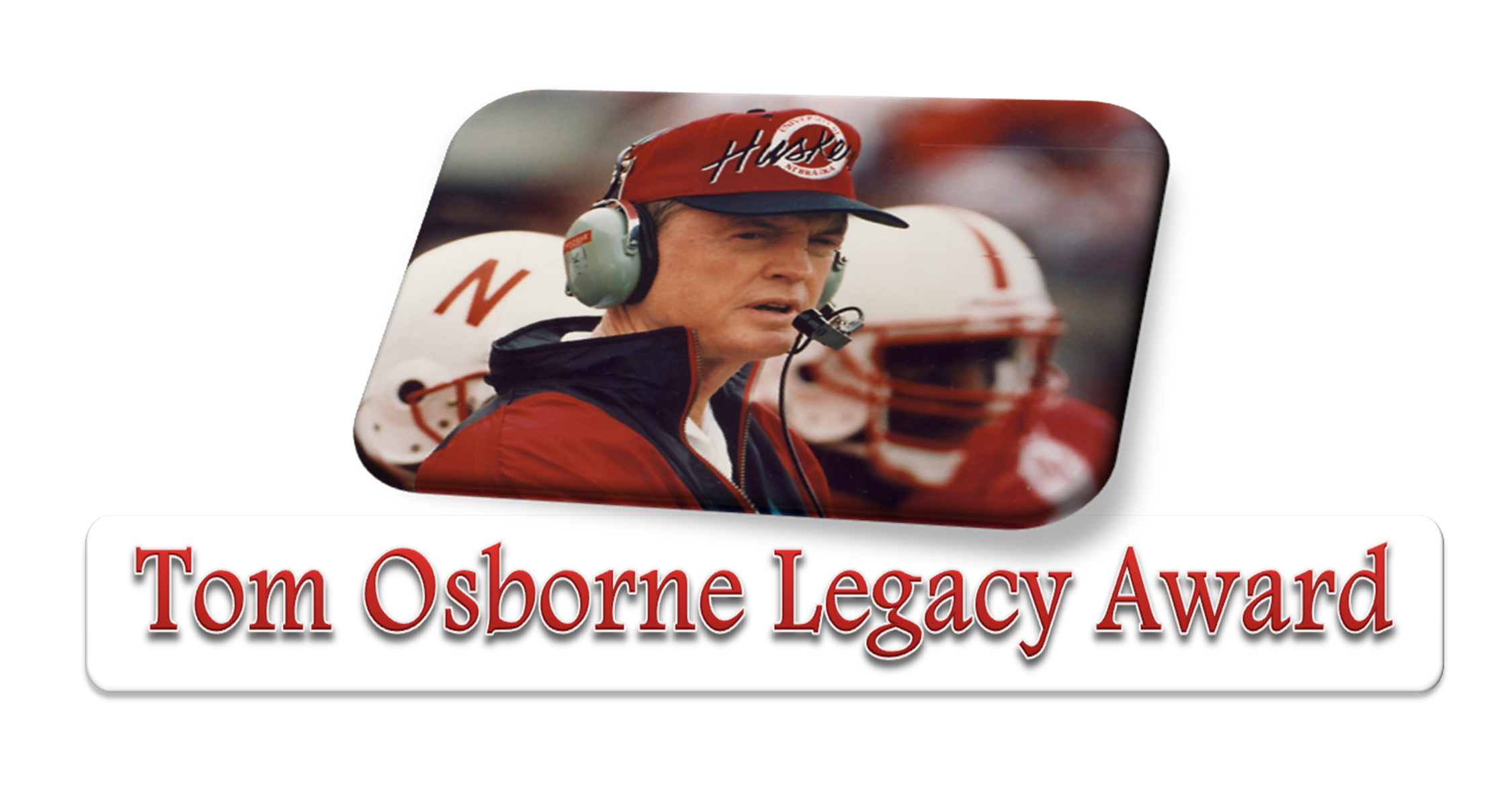 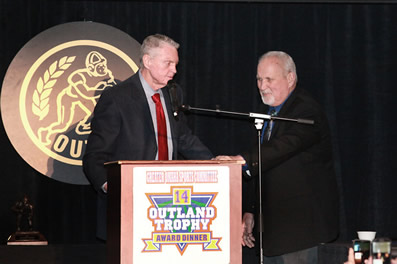 Selection Criteria:
•Candidate predominately played, coached and/ or made extraordinary contributions to the interior line of college football; and/or made contributions to the Outland Trophy.
•Candidate exhibited the characteristics of integrity, sportsmanship and fair play associated with Tom Osborne.
•Candidate continues to demonstrate a record of leadership in the community and continues to hold a record of good citizenship within and beyond the athletic field that is consistent with one of the award sponsors, Rotary Club of Omaha’s primary motto, “Service Above Self”. 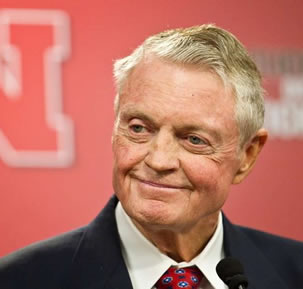 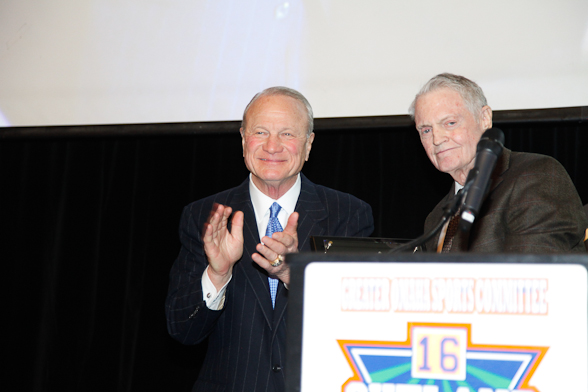 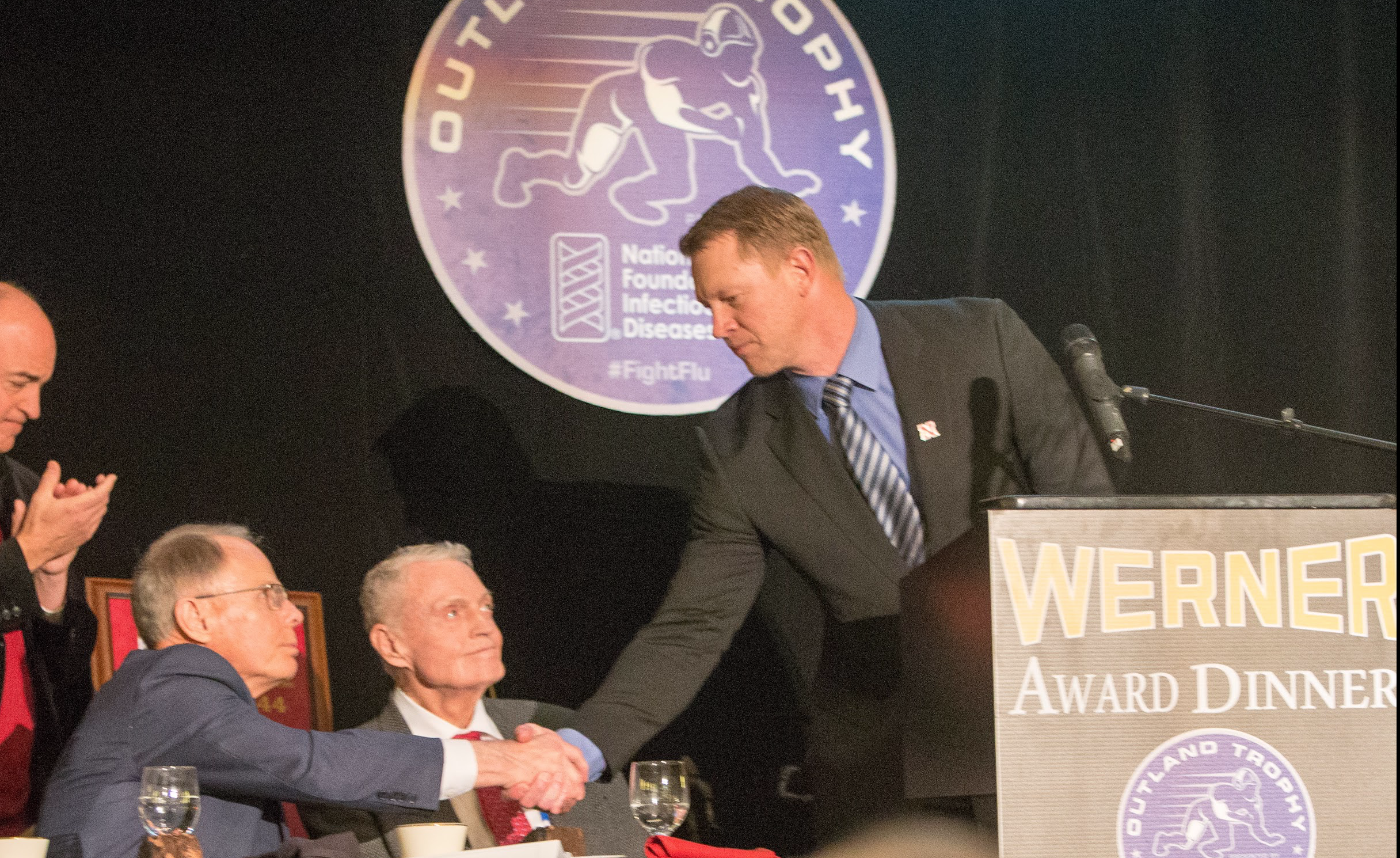 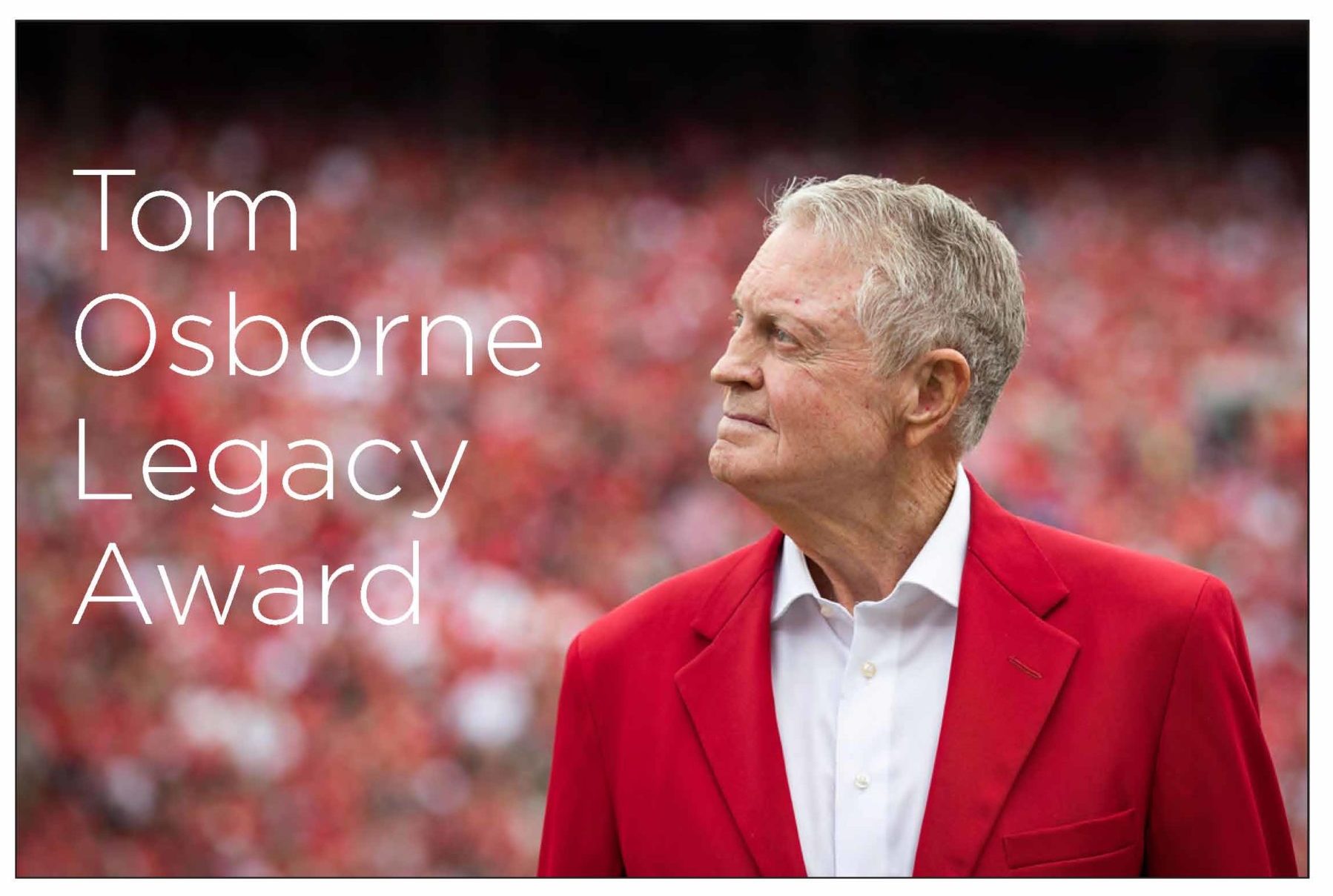 Tom Osborne Legacy Award is established to recognize an individual who is a:

“Winner On and Off the Field”.

While winning 255 games from 1973-1997, 13 conference championships and three national titles as the head man, Coach Osborne was equally concerned about his players’ development and life after the game. His teams produced more Academic All-Americans than any other in college football during his era. He emphasized the full development of his players’ lives – academic success, character development, a good spiritual foundation and involvement in the community.

Few if any coaches have impacted college football more than Tom Osborne when it comes to producing great linemen. His legacy of building a strong foundation in the trenches, whether it was on offense or defense, endures to this day. 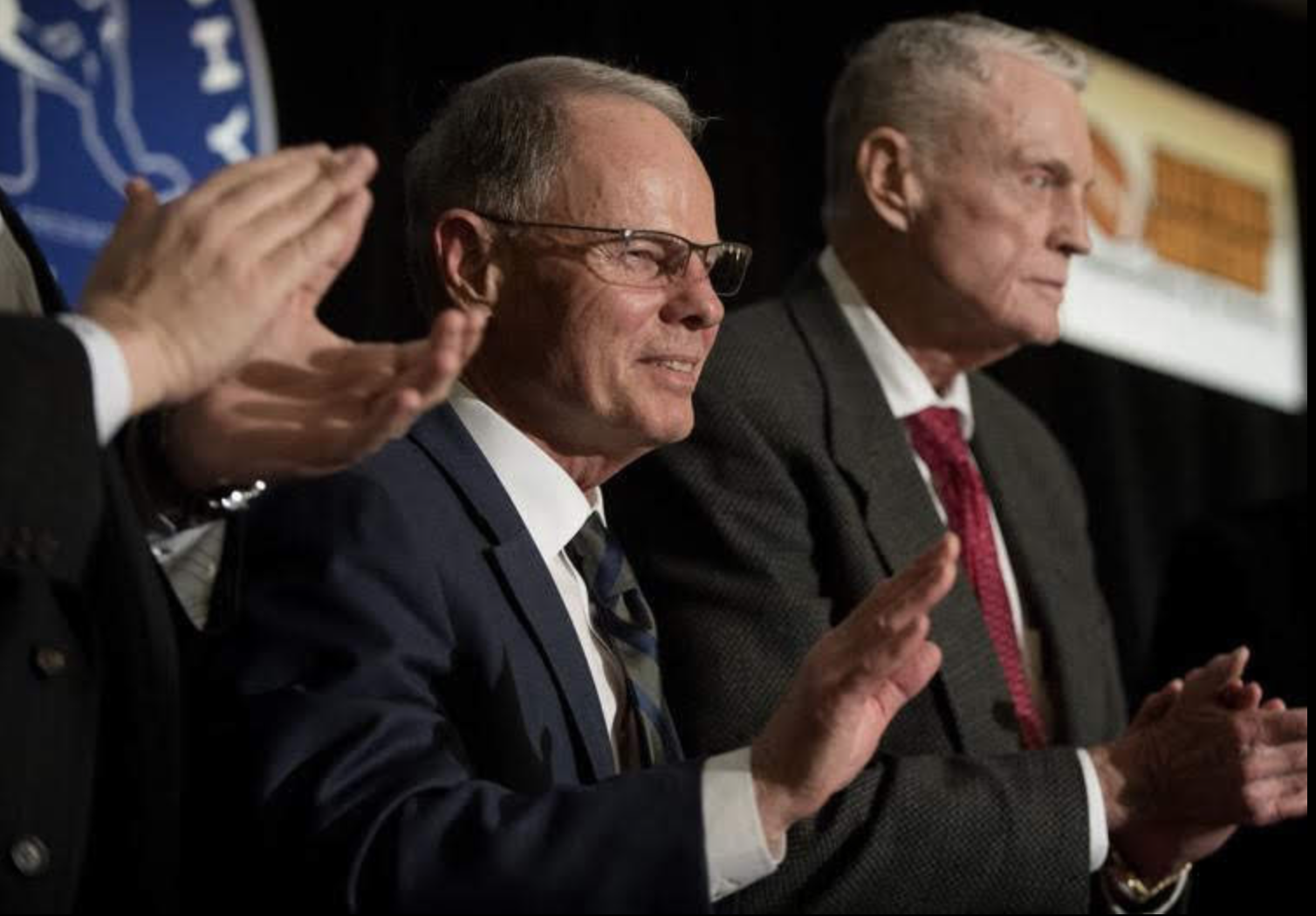 Coach Osborne has been involved with the most Outland Trophy Winners in the 69- year history of the award. Starting with Larry Jacobson in 1971, Coach Osborne has been associated with all of Nebraska’s eight different Outland Winners, either as an assistant, head coach or athletic director. During Coach Osborne’s head coaching tenure, Nebraska’s ability to produce great linemen was unparalleled in major-college football. In only six of Tom Osborne’s 25 seasons as head coach did the Huskers fail to produce an All-American on the offensive line. His teams generated at least one first-team, all-conference offensive lineman every season. 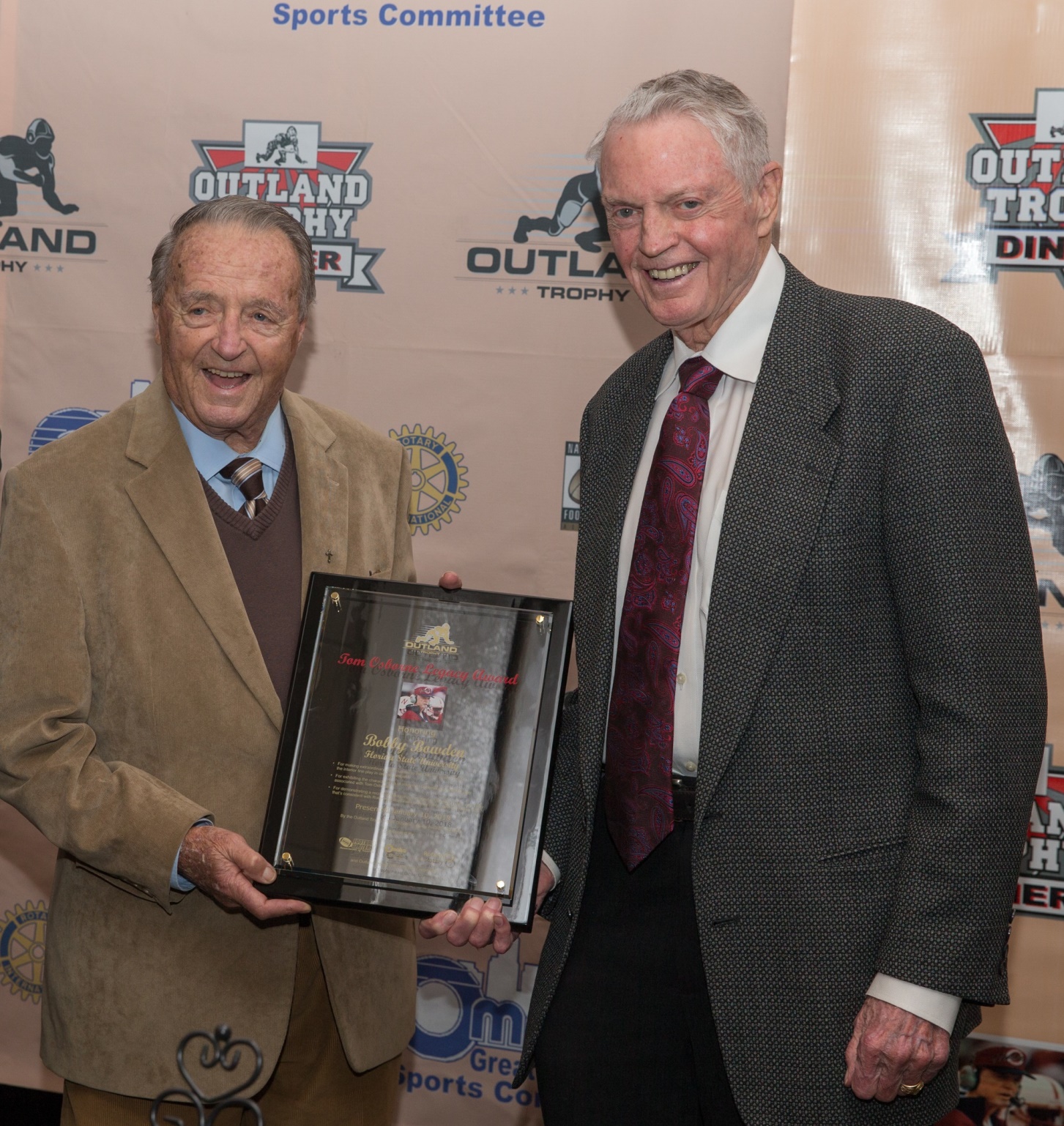 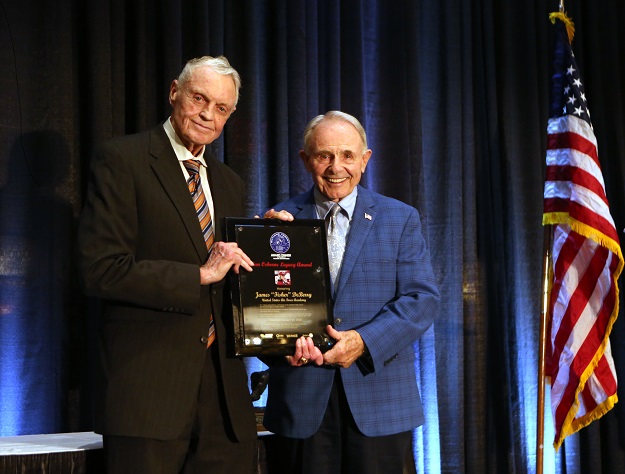 Tom Osborne not only has enjoyed success as a player, coach and athletic director, but he also has made a positive impact during six years of service in the United States’ Congress and with the founding of Team Mates, one of the country’s premier mentoring programs. 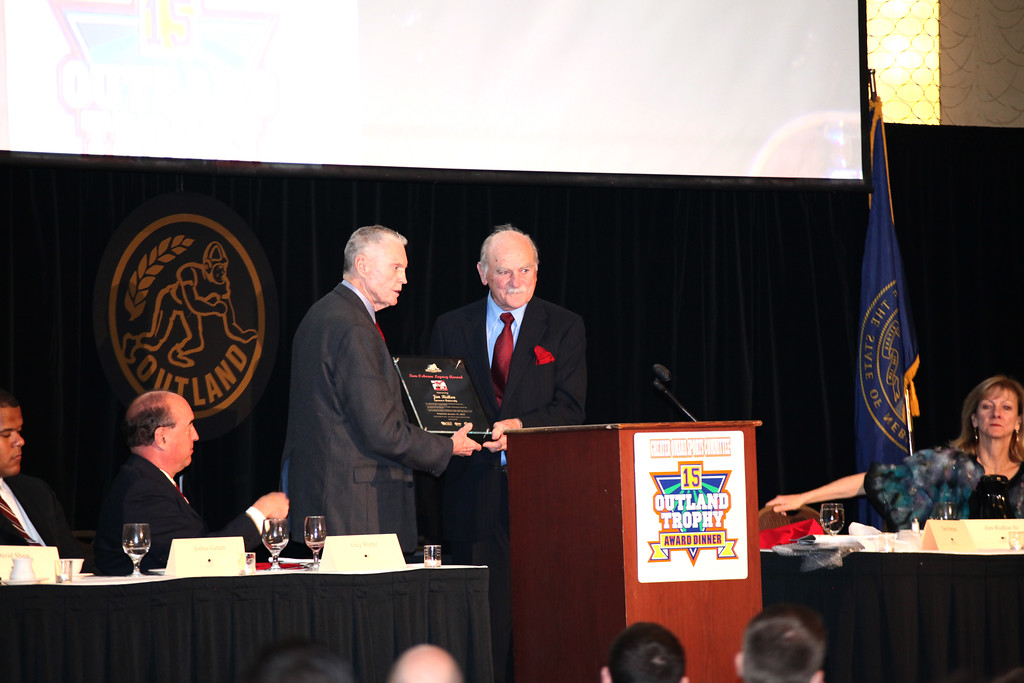 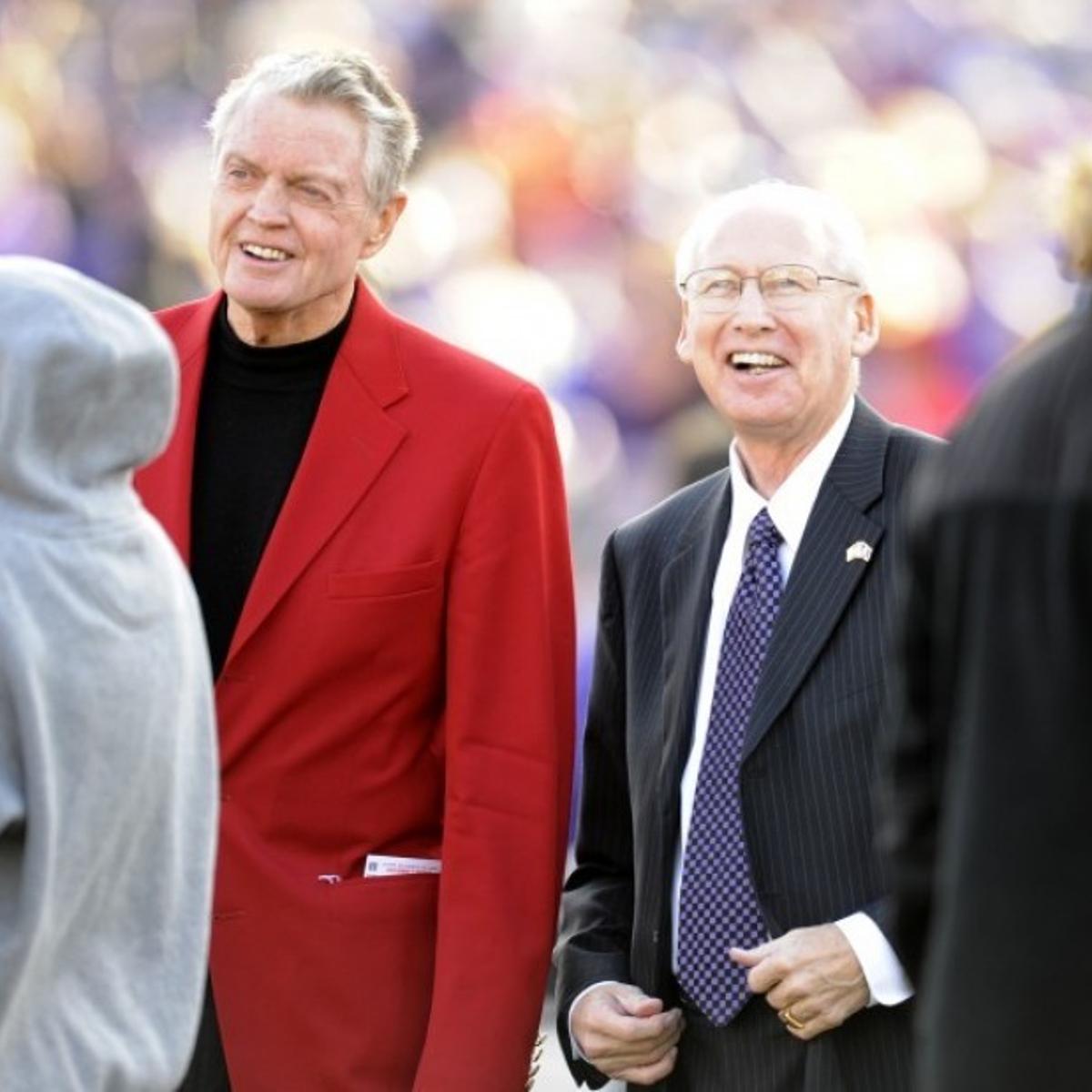 The Tom Osborne Legacy Award presented  — by Osborne to Will Shields— at the Outland Trophy Award Dinner Sponsored by Werner Enterprises at the downtown Hilton Omaha. 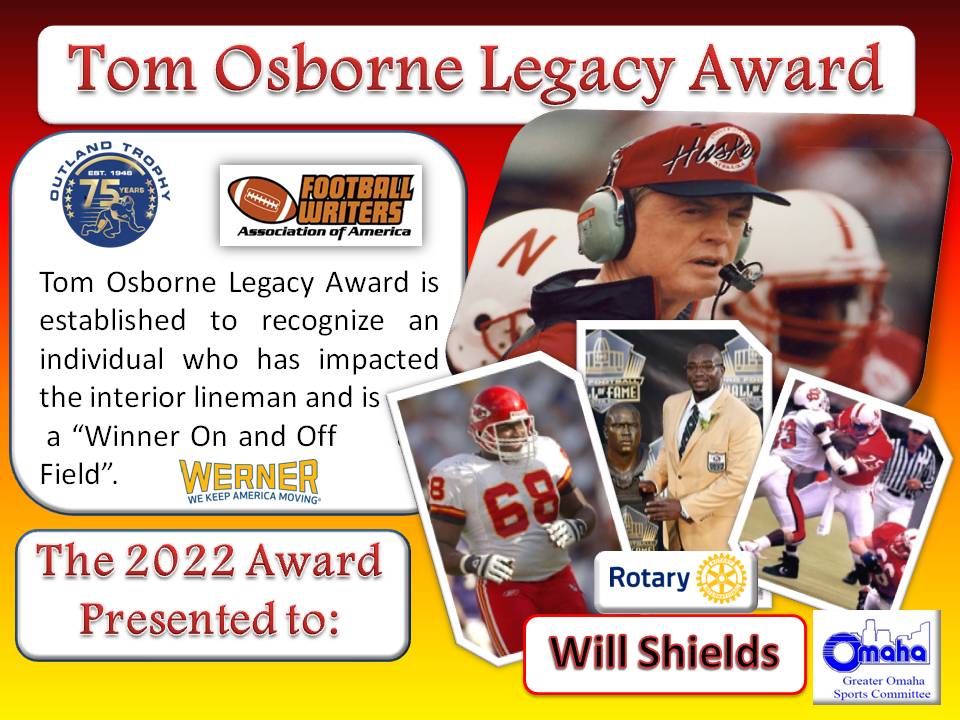 If you’re a college football fan, or even a sports fan in general, it is a remarkable scene, One you will not forget! 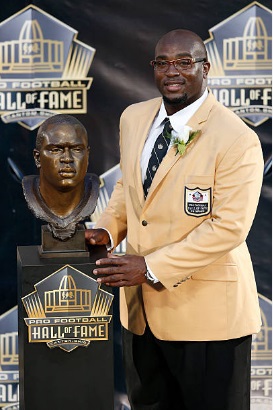 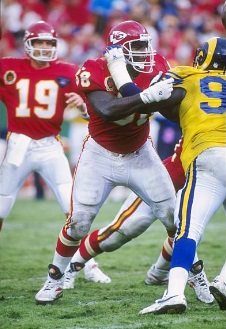 Will Herthie Shields is a former professional football player who was an offensive guard in the National Football League. He played his entire professional career for the NFL’s Kansas City Chiefs, and never missed a game in 14 seasons. Shields was inducted into the College Football Hall of Fame in 2011 and the Pro Football Hall of Fame in 2015. with Kansas City Chiefs. He played college football for the Nebraska Cornhuskers, earning consensus All-American honors and winning the Outland Trophy.Will Shields will be in Omaha to accept the award from Tom Osborne, Nebraska’s legendary coach, at the 25th annual dinner.

This is the eighth year for the Tom Osborne Legacy Award, which goes to a player, coach or a person who has made an extraordinary contribution to the interior line of college football; and/or has made contributions to the Outland Trophy. The recipient must exhibit the characteristics of integrity, sportsmanship and fair play associated with Tom Osborne and demonstrate a record of leadership in the community, Furthermore the person must continue to hold a record of good citizenship within and beyond the athletic field that is consistent with the one of the award’s sponsors, Rotary International’s primary moto, “Service Above Self.” 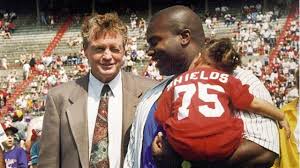 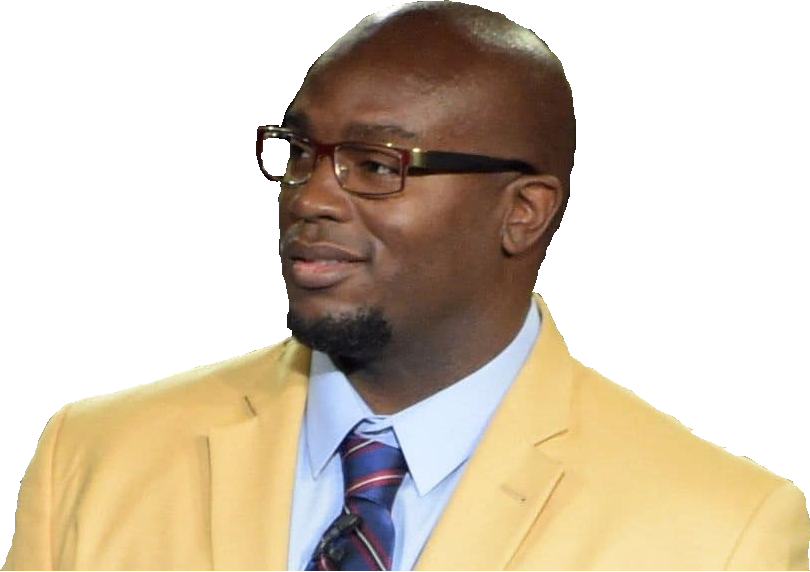 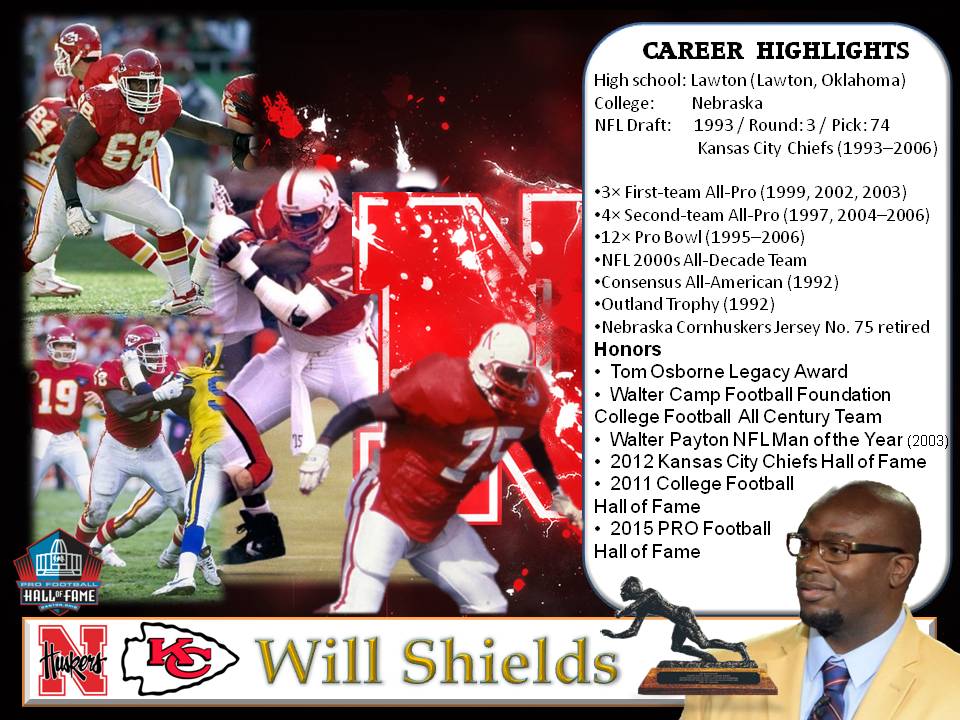 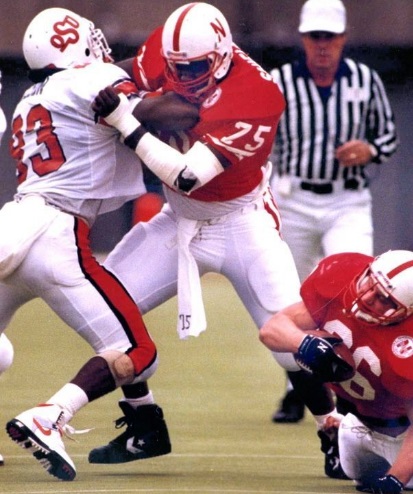 While attending the University of Nebraska-Lincoln, Shields played for the Nebraska Cornhuskers football team from 1989 through 1992. Shields was a consensus first-team All-American and Outland Trophy winner during his final year at Nebraska. He is one of eight Cornhuskers players to win the Outland Trophy. In 1999, he was selected to the Nebraska All-Century Football Team via fan poll and to the All-Century Nebraska football team by Gannett News Service. In 2002, he was named to the Athlon Sports Nebraska All-Time Team. He is one of only 16 Cornhuskers to have his jersey retired by the team. In 1999 Shields was selected as an offensive guard to the Walter Camp Football Foundation College Football All Century Team. The other offensive guards selected were John Hannah of Alabama, Aaron Taylor of Nebraska, Brad Budde of USC, Dean Steinkuhler of Nebraska and Jim Parker of Ohio State. Shields was one of six Nebraska Cornhuskers selected to this team; the others being Johnny Rodgers, Dave Rimington, Steinkuhler, Tommie Frazier and Taylor. 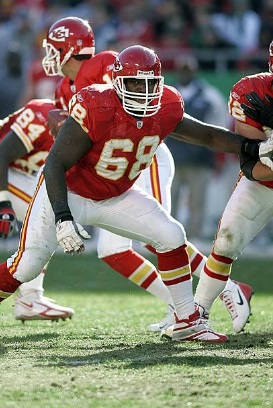 Shields was the third-round (74th overall) pick of the Kansas City Chiefs in the 1993 NFL Draft, after signing now Big Ten Commissioner Kevin Warren to be his agent. Shields played for the Chiefs from 1993 to 2006.[6] Beginning with a September 12, 1993 game against the Houston Oilers, he was in the Chiefs’ starting lineup for every game, a team record and at the time, the second longest active consecutive starting streak in the NFL behind Brett Favre of the Green Bay Packers. He started 231 straight games (including playoffs) at the right guard position; an NFL record. He went to the Pro Bowl every year from 1995 to 2006, a total of 12, a Chiefs team record, and having played in all of them, he is tied with Champ Bailey and Randall McDaniel for most Pro Bowls played. He was an important part in the Kansas City Chiefs offensive line that consistently led the team to a top 5 finish in rushing offense.

Shields blocked for Marcus Allen, Priest Holmes and Larry Johnson during his career. He had blocked for 1,000-yard rushers for five seasons. He blocked for 4,000-yard passers for five seasons while Elvis Grbac did it in 2000 and Trent Green in 2003, 2004, and 2005. In 14 seasons, Shields never missed a game, and he failed to start only one contest, his first regular-season outing, as a rookie in 1993. On April 15, 2007, following 14 seasons with the Kansas City Chiefs, he announced his retirement from football.

Shields currently owns and operates 68 Inside Sports, a gymnasium and sports facility, in Overland Park, Kansas. Shields is married to his wife Senia (a native of Denmark); they have one daughter, Sanayika, and two sons, Shavon and Solomon. The Shields family resides in Overland Park, Kansas. Shavon played basketball for the University of Nebraska and currently plays professionally in Italy for Olimpia Milano, while Sanayika is a former basketball player for Drury University.